A Comparison of Phase Locked Loops and Frequency Hypothesis Tracking

Processing low orbiting beacon satellite data has been a challenge largely because of the limited vehicle space for a VHF, UHF, L-band antenna system. The effective antenna patterns severely limit range of uniform illumination range with a common phase center. Low SNR, particularly at acquisition severely, constrains phase-locked-loop (PLL) performance. However, with post-pass processing substantially more processing can be devoted to the critical frequency tracking operation. Several schemes have been used effectively to construct a narrow band filter centered on the Doppler frequency defined over a local time segment. An analysis of these procedures was presented in a paper REF.
In the paper it was hypothesized but not demonstrated that typical PLL performance was degraded for SNRs below 10 dB to the point that direct frequency estimation was a preferable alternative. The note SoftwarePLL compares frequency estimates derived from a conventional PLL and direct frequency estimation.

IES2015Rino is an oral presentation of the new material introduced in the previous post Application of Wavelet Based Analysis to C/NOFS Ionospheric Density Measurements.

Posted in New Results | Comments Off on IES 2015 Paper

Tomographic reconstruction of ionospheric electron density profiles from GPS satellite measurement is being used extensively for global ionospheric monitoring.  For the most part, the reconstruction process is a constrained iterative process.  The results are sensitive to errors and initial conditions.  To study these limitations and the possibility of high-resolution reconstruction two-dimensional simulations have been used.  The simulation and analysis procedures are described in IntermediateScaleTomography, with the accompanying poster RinoPosterSA21B-2019(2).

To the extent that propagation disturbances can be approximated by an equivalent phase-screen, there are analytic models that allow computation of the power-spectrum of the intensity of the field as it propagates away from the phase screen.  The analysis involves an integration to characterize the structure initiation as a phase perturbation and a second integration to propagate the structure to the observation plane.   In real-world applications the integrations are two dimensional.  However, the field-aligned structure in the ionosphere can be exploited to reduce the computations to one-dimensional integrations.

This motivated a revisit of early computations based on two-dimensional and one-dimensional phase screens.  To test the numerical computations, which were performed by Charlie Carrano at the Boston College Institute for Scientific Research, analytic results for unconstrained inverse power-law spectra were used.  Disparities between the computations and the analytic results motivated a careful look at the analytic results derived from complicated limiting operations.  Some errors were found that clarified some long standing disparities between results by Victor Rumsey for isotropic structures and my own two-dimensional results, which should agree with the isotropic results if isotropy was assumed.  The new results are summarized in PowerLawPhaseScreenHighlights, with computational details presented in a separate note. PowerLawPhaseScreenReview,

An updated book errata sheet can be found ScintTheoryErrata

Chapter 4 of my book develops a computational framework for beacon satellite propagation.  With a reference coordinate system centered at ionospheric heights, even small propagation angles lead to very large displacements in the observation plane.  To avoid this problem, a continuously displaced coordinate system is used.  The defining equation in Section 4.1 was in error, which combined with some other errors in the defining equations made it difficult to reconstruct the equation upon which most of the calculation in Chapter 4 is based.  Equation 4.5 is correct.  A revision of an earlier derivation is attached.  I’m indebted to Harold Knight and Kshitija Despande for pointing out the inconsistencies. The errata sheet has been updated and placed on the book page.BookNotesNew

Posted in Scintillation Theory Book | Comments Off on Oblique Propagation

In Chapter 3 of my book the system of differential equations that characterize the propagation of complex two-frequency field moments in irregular media were developed. The attached note reviews this material and its connection to the original and most cited source of the equations in the scintillation theory literature.  A number of small but annoying errors in the equations have been corrected, and some definitions have been added for clarity.   With recent updates and additions as of July 23, 2011,  BookNotesCh3, fourth-moment-notes, ScintTheoryErrata

Earlier blogs on this topic discussed the relation of  The Theory of Scintillation with Applications to Remote Sensing, which uses the forward propagation method (FPE) , to optical methods based on the Huygens-Fresnel construction.  The revised paper linked below presents a more cohesive development.  There is a regime where wavelength does not dictate sampling requirements.  In this common regime, identical computational methods can be used for optics, acoustics, and radio frequency applications.  This regime includes the Fraunhofer diffraction limit.  However, the FPE is formally unconstrained.

A case in point is ray optics, which is based on a wavelength independent geometrical construction.  An example is shown in the Figure below.  The problem is the omission of diffraction.

The paper uses Fourier domain methods to compute the evolution of the wavefront from the aperture stop where ray optics gives an accurate representation to the focal plane.  The problem is that full diffraction computation requires wavelength scale sampling.

The figure below shows an example of Fraunhofer diffraction where computation at optical wavelengths is easily achieved.

The two figures below show the development of a focus at mm wavelengths where full-diffraction computations are feasible.  The details are discussed in the unpublished paper submitted for publication in Antennas & Propagation Magazine linked below. 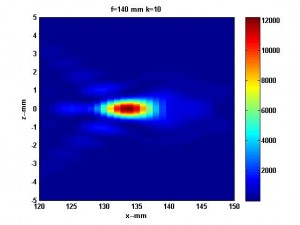 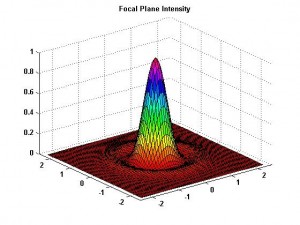 What’s the Book About

The theory of scintillation is about electromagnetic wave propagation in structured media.  But why does a phenomenon that has been studied for nearly a century now merit a new theoretical expose?  One part of the answer is that the essential elements of the standard theory are too easily comprehended.
https://chuckrino.com/?p=36
Consider the random lens model mentioned in my earlier post.  That conceptual picture is not far removed from the standard textbook development of the theory,  for example the development of imaging through turbulence in Chapter 8 of Statistical Optics by Joseph Goodman.  The theory provides an explicit representation of wavefront phase, which is very appealing for optical system analyses.  Nonetheless, any theory that builds on a mathematical separation of amplitude and phase cannot be reconciled with the recognized theoretical developments that have evolved over the past 30 years because they address complex field moments.  Conversely, that comprehensive theory (summarized in Chapter 3 of my book) provides very little utility for solving practical problems. The resolution of the dilemma and the compelling reason for revisiting scintillation theory comes from the computer revolution.  Although the idea is not new, the complete theory of wave propagation in structured media is encapsulated in a comparatively simple first-order differential equation.  The equation admits robust integration using a well-known algorithm that is easily implemented and executed with inexpensive personal computers.  The development is facilitated by interactive languages such as MATLAB.  Thus, simulations based on very high fidelity models bridge the gap between theoretical results that are either over-simplified or unwieldy.   With such simulations one can also explore the combined effects of path-loss, wavefront curvature, and antenna effects.

An example from Chapter 2 of my book (shown in the Figure above) simulates beam propagation along a layer with increasing inward radial refractivity.  As the beam expands, refraction redirects the energy toward the axis where a local focus functions like a local source.

A second example, which has already been introduced, is strong focusing.  The image shows fine intensity detail that admits no meaningful continuous phase reconstruction.  Yet, back propagation can be used to fully reconstruct the disturbance at the edge of the disturbed region. A third example shows the same type of simulation for propagation through highly anisotropic media at oblique incidence.  The overlaid white line and arrow show the apparent scan direction induced by source motion.  The final figure shows the intensity and reconstructed phase along the scan direction, which is what a Beacon  satellite receiver would observe, ideally. A directory of MATLAB codes with scripts that will reproduce all the examples in the book and more will be available for download on the MATLAB Central website.

Posted in General Interest | Tagged Scintillation, Strong Focusing | Comments Off on What’s the Book About

So what is the logo all about?  As an electromagnetic wave field propagates in a structured medium, the structure is first imparted to the phase of the evolving wave field. As the wave field continues to propagate, the wave intensity begins to feel the structure.  Think of a lens focusing a bundle of rays.  Very near the lens there is little intensity variation, but a convex lens can bring the rays to a focus where the intensity changes prominently.  A propagation medium with a turbulent refractive index structure can be thought of as a collection of random lenses. Shimmering images above a hot roadway and twinkling stars are examples of propagation in disturbed media, in this case the turbulent atmosphere.  The random intensity fluctuation is called scintillation.

The scintillation phenomenon has intrigued scientists for decades.  As it came to be understood, scintillation was used to determine the characteristics of light sources and media that are not accessible to direct measurement.  Scintillation can be a nuisance for satellite radio transmission and remote earth sensing.

The theory of scintillation can be intimidating, but riding the wave of the computer revolution http://www.computerhistory.org/  inexpensive computers can be used to simulate the phenomenon providing insights that would be very difficult to ascertain from data analysis and theory.  Strong focusing, a scintillation phenomenon that generates intensity structures that require advanced mathematics to characterize, can be realized with a few hundred lines of straightforward computer code.

The figure below illustrates a simulation.  The illumination is from the left.  The first image is the structure variation in the medium.  Because of the particular characteristics of this realization, the wave field propagating through the medium very quickly develops dramatic fractal-like structure.  The mathematician Michael Berry dubbed these fascinating structures diffractals.  As the field continues to propagate, however, the structure eventually evolves to a uniform speckle field.  Since free propagation is reversible, the field structure still retains the complete history of how it came to its present state.  MATLAB codes that will reproduce the structure are available with my book. 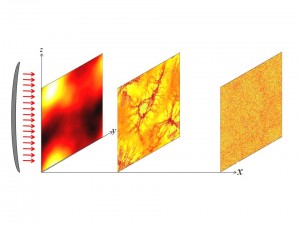 In remembrance of a colleague, Stanley Flatte, the copy of the cover of the July 1984 issue of Applied Optics is the first numerical simulation of this type.  Although the computation was performed on a Cray super computer, it has substantially lower resolution and dynamic range than what can be reproduced today on a high-end PC. 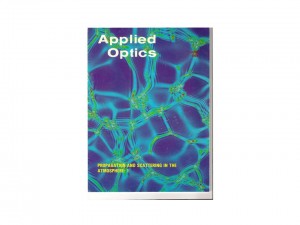